Recently we were preparing some POC for our client, one of our team member suggested to present some functionality which enables us to show data from an excel file in Siebel Screen.
so we thought to give it a try .we used the below approach.

1. Since data sorce was not any siebel table but a external file, we had to use VBC to read the file.
2. Created New VBC ,Business Service, Applet  to show the data.

the exact steps were :

4. Create the Business Service ,the sample code looks like

5. Create a new applet based on the created VBC and Add it to either existing view or create a new view.
6. Compile and test you changes. 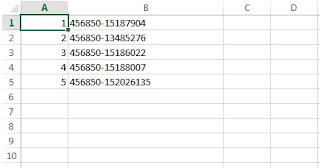 Hope this was helpful...

Note : VBC are specialised type of BC which are not based on any tables but get the data from the business service on which they are based. Various operation like Update, Query, Insert can be performed on VBC based on the method defined in the Business service.

Hello All,  We all must have used GoTo view functionality of siebel to navigate to a particular view from current view. What if the require...